We all know the classic film hit by Alfred Hitchcock, The birds, when a flock of birds terrorize people. Although the film was all fiction, it comes to life in Australia every spring during nesting season of magpies.

Every year, as the weather starts to warm up, birds start breeding. Magpie are outstanding parents, they nurture their babies and defend them against any perceived enemy. This includes swooping to defend their eggs and young if they perceive people to be a potential threat, which causes increasing trouble for passengers in parks and bikers.

A stunning number of 3,375 attacks and 540 injuries linked to magpies happened across Australia this year, according to Magpie Watch, a social media website which monitors attacks. Although there are other species known for attacking people to protect their nests and babies, magpies are considered the most fierce protectors of their territory. The unprecedented growth of the number of such attacks this year prompted concerns that the changing climate and the increasing urban development that may be affecting the birds’ behavior.

Magpie attacks come from behind and are always directed at the head. In a sneaky swoop they use their closed beak or open claws. They also dive bomb, the bird flying fast and using its full body weight to buffet the back of the intruder’s neck or head. Given the speed and the weight of the birds, this sort of attack can stun and may cause serious bruising.

Officials issued a series of advice which include travelling in a group; moving quickly through the area but not running; wearing a hat or carrying a stick or umbrella above one’s head; and even drawing a pair of eyes on the back of headgear so that the birds think they are being watched. Cyclists are advised to wear a helmet, dismount and walk.

The www.magpiealert.com is a fantastic social initiative to report aggressive birds and help people avoid the critical areas. You can also follow the news on their Facebook page at www.facebook.com/magpiealert.

Although such an attack may catch you off-guard, please, do remember not to harm these birds when if you fall victim to one, because they are protected. We have a much better solution to ward them off, check it out here. 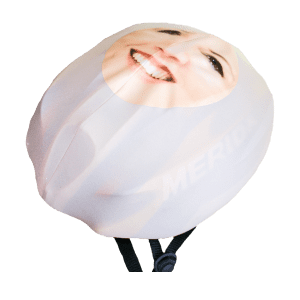 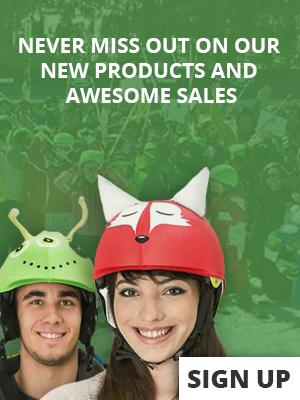 Cookies are delicious and useful. They help us provide you a superb experience on our site and learn about your preferences to show you helmet covers you’ll love. You can learn more about our cookies or choose which ones you’d like in settings.

We use cookies to provide you with the best user experience possible. Cookies are delicious crumbs of information stored in your browser. They perform functions such as recognizing you when you return to our website and helping us understand which sections of our website you find most interesting and useful. This helps us give you what you like next time, too.

These cookies should be enabled at all times so that we can save your preferences for later.

If you disable this cookie, we will not be able to save your preferences. This means that every time you visit this website you will need to enable or disable cookies again.

Our website uses Google Analytics that puts cookies in your browser, too. These cookies are mostly delicious for us, because they let us know about the number of visitors to our site and the most popular pages. Your information is safe, since these cookies collect anonymous information and keep your privacy safe.

Please enable Strictly Necessary Cookies first so that we can save your preferences!